Vancouver city councillors have approved a new city-wide plan meant to guide the next three decades of development.

But while the ambitious Vancouver Plan council voted in Friday lays out a vision for land use in different parts of the city, it doesn’t actually make any formal changes.

Implementing the goals of the plan will be up to the next mayor and council, elected in the Oct. 15 municipal election, through an official follow-up development plan bylaw.

“Today, with the passing of the Vancouver Plan, we are charting a new path forward for the future of our city, guided by the promise of making every neighbourhood more affordable, equitable and vibrant for everyone,” Stewart said in a media release.

The Vancouver Plan lays out a strategy to adapt development for an anticipated 260,000 new residents in the city over the next 30 years, while aiming to ensure affordable housing for new and existing residents.

It paves the way for the city to allow mixed-use and purpose-built rental in virtually all of Vancouver’s neighbourhoods, along with multiplexes and townhomes to target the so-called “missing middle” in the housing market. 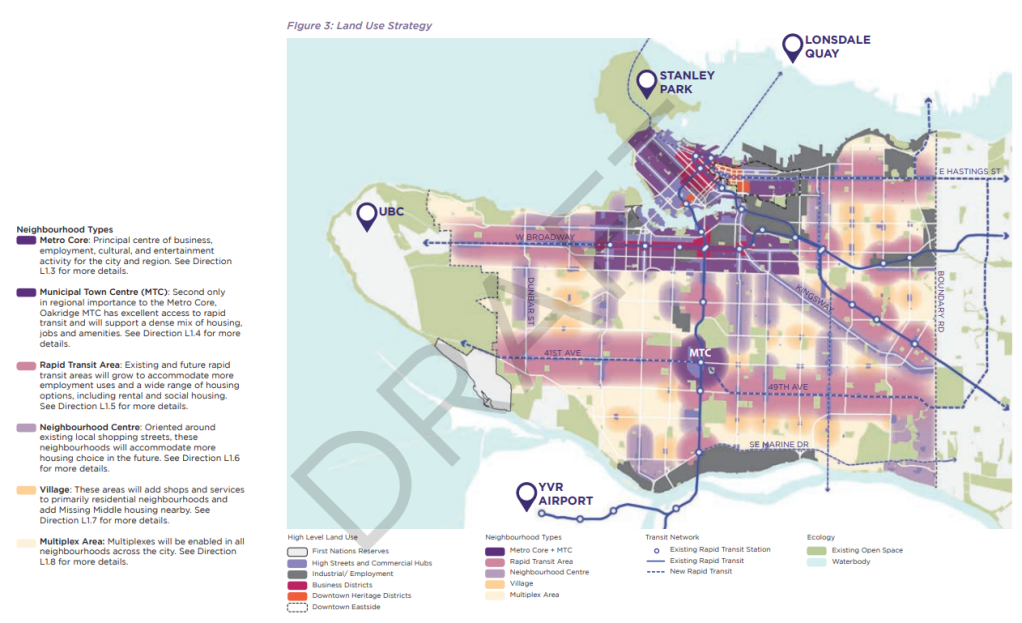 The plan also envisions spreading economic activity from its current hubs through the introduction of mixed residential and commercial land use in lower-density neighbourhoods of the city.

The new land-use strategy will direct new housing choices toward low-density neighbourhoods that are “rich in amenities,” it says, along with adding amenities and services in areas that are currently underserved.

The city plans to “significantly increase the supply of social and supportive housing” and support Indigenous-led housing and wellness projects, the plan says.

The plan passed Friday also includes an amendment opposed to extending the renter protections included in the recently-approved Broadway Plan to the entire city.

Under those protections, described by Stewart as the “strongest in Canada,” renters evicted due to redevelopment would be entitled to return to their unit at the same or lower rent.

“We’re a city of renters, and all of us deserve the opportunity to live a great life in any neighbourhood,” Stewart said. “The Vancouver Plan will expand housing choice and create new opportunities in parts of the city that have been largely off limits today – all without displacing long-time renters.”

Those protections have faced criticism from two sides, with some warning it could scare off needed redevelopments, while tenant advocates have expressed concern they won’t be enforced.

The plan also contains what the city calls a comprehensive ecological framework to protect green space and tree canopies, and restore ecosystems.

It also aims to “embed ecosystems in planning,” and create “an integrated network of public spaces, ecological corridors” and greenways for active transportation.

In the future, it says, the goal is for 76 per cent of Vancouver residents to live within a five-minute walk of shops and services, up from the current 58 per cent.

The approval of the plan concludes a process started in 2019, and involved extensive public consultation and reviews.

The city says staff will now work out details of how renter protections and developer contributions would be included in the anticipated future implementation of the plan.

Staff have also acknowledged that the plan could be repealed if it was opposed by a majority of the next mayor and council elected in the fall.

With files from the Canadian Press