This time, the Calgary Flames are flashing back to the ’90s with a remix of the Pedestal.

The era brought big changes and diminished success for the Flames in the afterglow of the team’s 1989 Stanley Cup victory.

Despite less-than-stellar on-ice results, the 1995-96 season gave fans their first look at the new jersey — as well as a superstar in the making.

“That was Jarome’s (Iginla) rookie jersey, so of course, that’s what resonates with a lot of fans,” Flames director of retail Brent Gibbs said shortly after the Reverse Retro release.

“Our first order online was Iginla.

“People are still, you know, huge fans of the past.”

The Reverse Retro inverts the colours of the original design while tweaking small details like the size and stitching of the ‘Flaming C’ and adding the retro NHL crest to the neck.

The black base has more significance than one might think.

In 1993, the Flames turned to legendary Canadian artist Bill Brownridge to incorporate the colour into a new uniform.

Brownridge, while internationally known for his richly coloured hockey art and children’s books, had a strong background in graphic design and had already designed jerseys for the WHL’s Calgary Centennials.

“We had free reign with it,” Brownridge, days after celebrating his 90th birthday, said of the design process.

“There’s a psychological element to uniforms. I noticed teams have trended towards a totally black uniform. I think black adds more of a less kind look — or more ominous look — to a uniform.”

The Saskatchewan Hockey Hall of Famer considered his jersey work just as artistic as his work with paint and canvas and hoped a diagonal stripe design would represent putting the ‘Flaming C’ on a pillar, moving the organization onward and upward.

And so, the first iteration of the pedestal jersey was born.

Then it was time to test how the jersey would look on the ice — and whether the Flames’ brass would approve.

“You have different colour numbers, styles and things and they all have to appear good on television,” Makar said.

“Late at night —total secret, probably after 12:30, 1:00 a.m. in the ‘Dome —they were filming just to make sure that numbers would look good on TV. I still have these pictures of me in all these different uniforms and it’s like ‘Oh yeah, I made it to the show!'”

The design team tested several versions of the pedestal on the 'Dome ice in front of Flames brass in the dead of night so no one would see it before it was ready. Brownridge's coworker + close friend Gary Makar (Cale's dad) modeled the uniforms, as seen in these original concepts pic.twitter.com/t0l9XWAN7D

There was one notable element of the uniform the team did not sign off on: chevron-striped hockey socks.

The team would wear the jerseys from 1996-2000: a stretch where the team failed to qualify for the playoffs in four straight seasons.

Like the original Blasty, the Pedestal brings back painful memories for a certain generation of Flames fans.

But for those who had a hand in bringing it to life, the backstory will always hold a special meaning, and they’re glad to see the jersey return.

“It makes me really feel good because, you know, I don’t think that my uniform was quite as popular as I hoped it would be,” Brownridge said.

“To see that they at least recognize some of the design elements and have gone back to them, that’s quite rewarding.”

Although, Brownridge added ruefully, he wishes they’d also gone with the chevron socks.

“50 per cent of the people like it, 50 per cent hate it — like in anything in the design world,” Makar added. “I thought it was really neat at the time when what he came up with was just totally different.”

“I’m sure some people, you know, the traditionalist, went, ‘This, I don’t get it!’ But the story is what I really liked, it meant so much.”

The Flames are currently slated to wear their Reverse Retros during the following games:

Calgary’s ‘Blasty’ jersey was among the top three best-selling Reverse Retro jerseys last season and inspired the team to revive the uniform as its alternate. 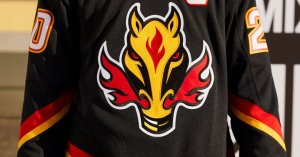